By now, many of you will have gone and tried out the new Google Maps application. By and large, you have to admit that it’s pretty damned slick for a DHTML web application – even my wife was impressed, and that’s not easy with geek toys. So, in the spirit of Google Suggest and GMail, I’ve decided to have a quick peek under the hood to figure out what makes it tick.

The first thing I noticed is that it doesn’t quite work like GMail. Whereas GMail uses XMLHttp to make calls back to the server, Google Maps uses a hidden IFrame. Each method has its benefits, as I’ll discuss below, but this difference of approach does seem to imply that it may not be the same team doing the work.

Probably the most striking thing about Google Maps is the very impressive (for DHTML, anyway) graphics. Now, I’m sure that many of you old JavaScript hacks out there have known this sort of thing was possible for a long time, but it’s very cool to see it (a) actually being used for something real, and (b) where normal users will see it.

For those to whom the implementation is less than obvious, here’s a quick breakdown. The top and side bars are (more or less) simply HTML. The center pane with the map, however, is a different beast. First, let’s address the map itself. It is broken up into a grid of 128x128 images (basically like an old tile-based scrolling console game). The dragging code is nothing new, but the cool trick here is that each of these images is absolutely positioned – and the ‘infinite’ scrolling effect is achieved by picking up tiles that are off-screen on one end and placing them down on the other end. The effect is kind of like laying track for a train by picking up track from behind it. 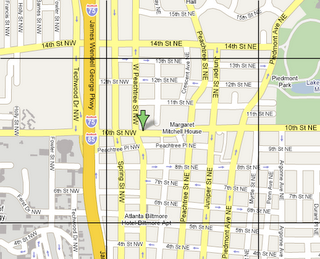 The push-pins and info-popups are a different matter. Simply placing them is no big trick; an absolutely-positioned transparent GIF does the trick nicely. The shadows, however, are a different matter. They are PNGs with 8-bit alpha channels. Personally, I didn’t even realize you could depend upon the browser to render these correctly, but apparently (at least with IE6 and Mozilla), you can. And they actually render pretty quickly – for proof, check out the overlaid route image (at the end of the article), which is often as big as the entire map view.

The pushpin, with its two images outlined

Communicating with the Server

There are two ways in which Google Maps has to communicate with the server. The first is to get map images, and the second is to get search results. It turns out that getting map images is remarkably easy – all you have to do is set an image tile’s URL. Because the coordinate system is known and fixed (each tile represents a known area specified in longitude and latitude, at a given zoom level), the client has all the information it needs to set tile URLs. Each tile URL is of the following form:

I’m not sure what the ‘v’ argument specifies, but it never seems to change. The others are fairly self-explanatory. One nice side effect of this is that the images have fixed URLs for a given chunk of the earth’s surface, so they get cached. If you’re doing most of your searches in one region, then the app can be quite snappy once everything gets cached.

Doing searches is another matter. Clearly, you can’t ‘submit’ the entire page, because that would destroy your map and other context. Google’s solution is to submit a hidden IFrame, then gather the search results from it. Let’s say, for example, that you simply wanted to go to Atlanta. You type ‘Atlanta’ in the search area, and the following HTTP GET is made:

There are a couple of things to notice here. The ‘question’ is passed in the ‘q’ parameter (much like Google). The other arguments are ‘z’ for zoom, ‘sll’ for longitude & latitude (your current focus, I believe), and ‘sspn’ to specify the span/size of your viewing area. What’s interesting is what comes back:

This HTML is loaded into the hidden IFrame which, when loaded, will punt a big chunk of XML back up to the outer frame’s _load() function. This is kind of a cool trick, because it saves the outer frame from having to determine when the IFrame is done loading.

I mentioned before that there was some advantage to be had by using a hidden IFrame over making direct XMLHttp requests. One of these is that the IFrame’s state affects the back button. So every time you do a search, it creates a new history entry. This creates an excellent user experience, because pressing the back button always takes you back to the last major action you performed (and the forward button works just as well).

Ok, so now the outer frame’s code has a big chunk of XMl. What can it do with that? Well, it turns out that Google Maps depends upon two built-in browser components: XMLHttpRequest and XSLTProcessor. Oddly enough, even though it doesn’t use XMLHttpRequest for making calls to the server, it does use it for parsing XML. I’ll get to the XSLT later.

Here’s an example of the XML response that comes back from the ‘Atlanta’ request above:

Nothing surprising here – we have a title, query, center & span, and the location and name of the search result. For a slightly more interesting case, let’s look at the response when searching for ‘pizza in atlanta’:

Again, nothing too surprising when you think about the data that’s going to show in the map pane. But how do the results get shown in the search result area to the right? This is where things get a little wacky. The JavaScript actually uses the XSLTProcessor component I mentioned earlier to apply an XSLT to the result XML. This generates HTML which is then shown in the right panel. We’ve come to expect this sort of thing on the server, but this is the first time I’ve ever seen it done on the client (I’m sure it saves Google lots of cycles, but personally I didn’t even know XSLTProcessor existed!)

There’s one last case to discuss, and that’s driving directions. This works just like other searches, including XSLT to show the results, with one exception: the result XML includes a

This polyline data is then used to request the route PNG from the server using a URL like so:

That’s about it. I hope that demystifies this application a bit; the real magic, of course, is all the work going on to enable this on the back-end. The fact that Google’s servers can handle all of these images requests, route finding, line drawing, searches and the like so quickly is the real magic. I also want to point out that their map renderer (or the one they purchased) works much better than all the other ones I’ve seen on Mapquest, Mapblast, and the like. That alone makes it worth using, if only so you can actually read the map!

I also think it bears noting that Google is pulling out all the stops to build rich web apps, no matter how weirdly they have to hack the browser to make them go. And I strongly believe that this is a trend that is here to stay – XHTML Strict/CSS/etc be damned. At the end of the day, what really matters to users is compelling apps that let them get their work done quickly.

Note: I'm moving to G+ comments, but also want to preserve the old blog comments in read-only form. I just haven't gotten around to that last part yet, so they're temporarily unavailable.